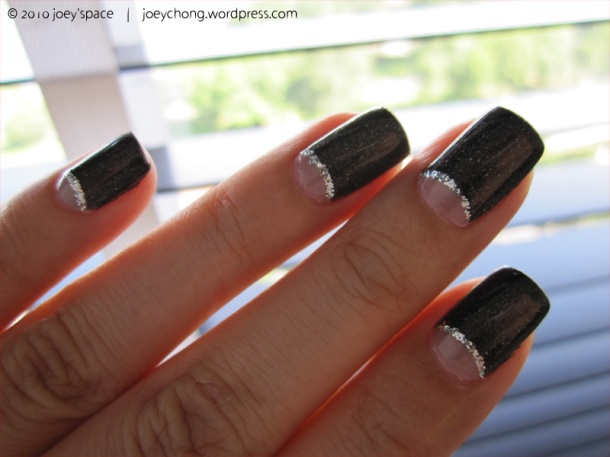 At times, my brain gets a little dead thinking of what designs I should have for my nails. After reading Sophia: The Make-up Blogette’s entry on DIY Half-Moon Manicure, I have decided to try it. I have never done a half-moon before.

I would love to DIY this set of nails but my left hand is never a good painter so I turned to the professionals for help.

Haven’t done my nails for quite some time since I removed my extensions in June. The thought of having the half-moon idea got me real excited. The next thing is choosing colours for them.

Shavonne, my manicurist suggested MISA Beautiful as a base and OPI My Private Jet as the “tip” plus a sliver glitter line across to make the colours pop.

Beautiful is a very natural pink colour and My Private Jet is a deep drown packed with tiny silver sparkles. I am loving the combination and the silver line really made the colours popped.

This set of nails are subtle enough for everyday wear as well as dinners and parties because of the glitters. Perfect for a week of work and events.

Below are some ideas for a more traditional and dramatic set of nails. From the pictures below, you can probably see the difference of having half-moon designed on squared nails and rounded nails. If I have longer nails, I would most likely have them rounded, it defines the half-moon a lot better.

What do you think?

8 thoughts on “Nails In Half Moon”