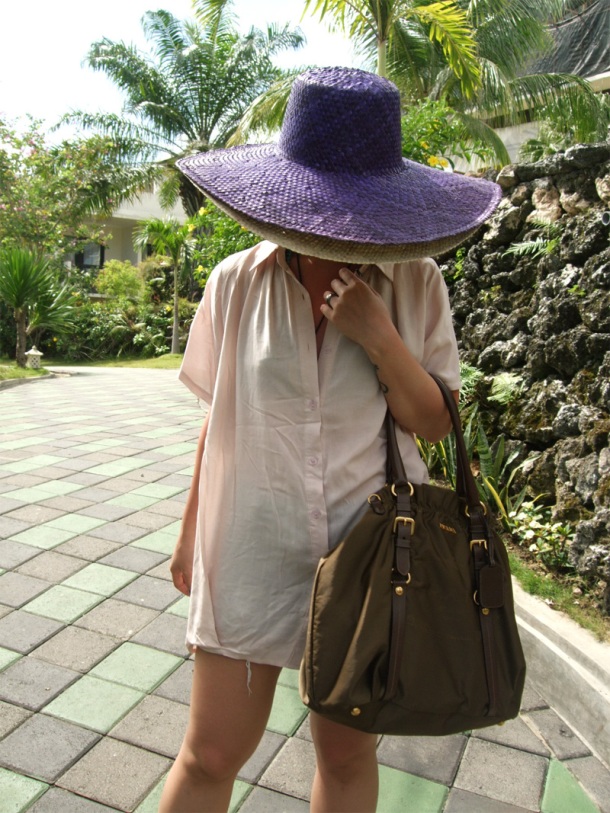 Layer on the hat for double the protection as I am going to be under the sun, on the beach and in the water today. Nah, I was actually helping Jessie with her hat, not a bad idea, ey?

We are both ready for some exciting watersports today. The usual thing to do in the car.

Camwhoring. Look at Jessie’s sexy little knitted dress she bought the day before. Isn’t it pretty?

Our first stop was to seek for a Paragliding site. It was nowhere to be found. Driver couldn’t find it despite asking people for directions throughout the journey. So, we have decided to save Paragliding for our next trip. 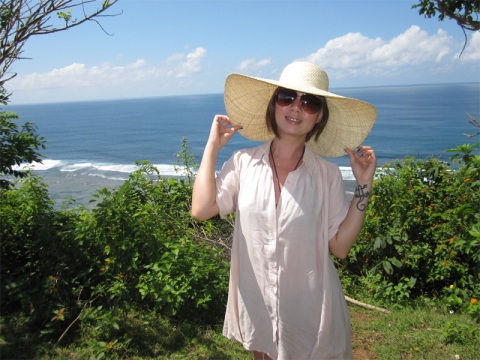 Instead of leaving empty-handed, we stopped at a hill-top for some sight-seeing and photo taking. The ocean is breath-taking. Crystal clear blue waters filled with surfers.

30 mins later, we were down for some real business. We arrived at Nusa Dua and have selected 4 extremely dangerous sports to do. Things that I have never tried before except 1.

I am extremely scared of heights and yes, I went for Parasailing!! Yeah!! That’s me in photo below, far away from land.

I loved the feeling of being able to look down at everyone just because in actual day-to-day life, I don’t really have the chance (because I am short). But I must tell you, I was panicking in the air. Seriously, I didn’t sit on the strap properly when take off and I constantly had the feeling of falling!!

Oh my goodness, I was holding on tight with both my arms, hoping and praying I don’t fall. 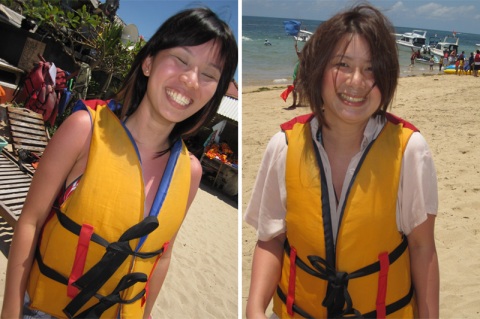 That’s Jessie below striking a pose before landing.

I believe the Fly Fish is something new. Everyone I spoke to when I came back haven’t heard of it. It is a MUST TRY. It’s comfortable and very fun, even for me. If you are wondering, there are no safety belts of whatsoever. All we had, was the strap you see in the picture (something similar to the strap for Banana Boat).

And in the next picture, you see the how high it flew? All without protection. If either one of us let go, we will fall straight into the ocean with a strong impact. 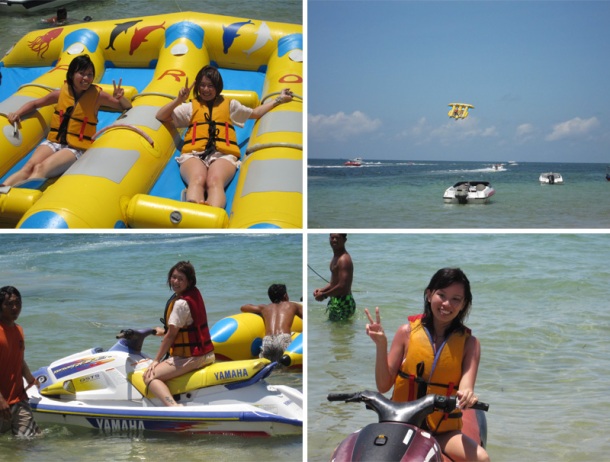 Here comes the third sport we did – Jet Ski. This is my second go at it and I am still loving it. We don’t ride alone, there is some random guy riding with us and it’s kind of creepy to have a total stranger behind you. But I feel it’s better because he can show me all the tips and tricks and perform more dangerous and exciting stunts.

We went over the waves and speed all out. There is so much freedom to Jet Ski here as compared to my first try in Bintan. At Bintan, I had to ski clockwise and only clockwise, how boring? 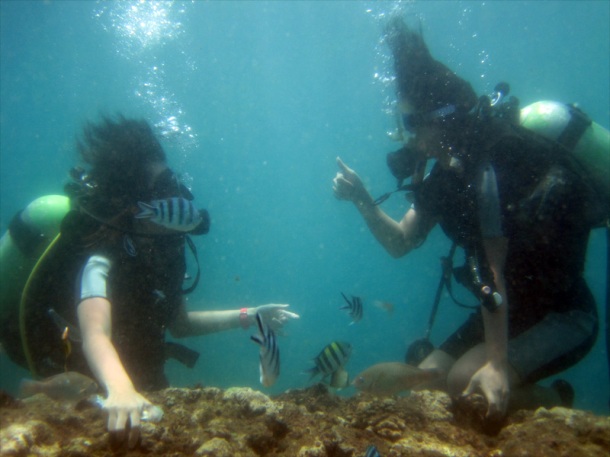 I am not a huge fan of fishes, especially fishes big enough to have me as its meal. So Scuba Diving was something I never thought of doing but since we were there, why not? I can chicken out and stay in the boat if I didn’t like it. I am the one on your right.

No licenses needed for diving, all we need was to attend a 30mins safety briefing. They thought us how to breath under water, how to combat ear pressure and some hand signs which I totally mixed up.

You see the “okay” hand sign I did in the first picture? It’s suppose to mean, I want to go up. I bet Jessie was real blur when I did that. Anyway, I am wearing blue goggles just so you can tell who is who from the pictures below. We got them to photograph and video our entire diving experience.

Don’t expect clear waters, colourful fishes and corals. It is nothing like that, at least not the area we dived in. I enhanced the first and last photos using Photoshop, made the colours more vibrant. If not, it will look exactly like the montage above.

I had breathing difficulties initially and when I went lower, my ears started to crack due to the pressure. I never expected it to be such a difficult task. The waters became cooler as we moved down and the currents were so strong at some point, we had to hold on tight to the coral just in case the current brushed us off to Atlantic.

Because the waters are so cloudy, my vision was about 5 meters and I kept turning around worried that there will be a shark coming at our direction. Oh good lord, I watched too many JAWS and DEEP BLUE SEA in the past.

Will I dive again? Definitely, but not at the same place.

I had such a wonderful day filled with excitement and anxiousness. Pretty much tried all the things I never thought of trying. It was an amazing experience. It was really emotional, I felt scared, happy, worried and sad all in a day.

What else could I have asked for more?

4 thoughts on “Welcome To Bali: Hang On To The Coral & Don’t Let Go”