According to Shu Uemura, Glow On Blusher in P Orange 55 is the same as P Soft Orange 540. Numbers and names have been changed during their recent revamp of the line, you can check the old and new names at Rouge Deluxe here >

I can’t always remember names and/or codes of the shades I have but I don’t own a huge collection of Shu Uemura Glow On Blushers – only 3 if you ask. While I was at the counter, I swatched P Soft Orange 540 and fell in love with it – on the other hand, trying hard to remember if I have a similar shade at home. Clearly remembered saying to myself the orange I have at home is sheerer, it must be different.

First thing I did when I reached home, get the orange blush out of my drawer and see if it’s a match. No, it doesn’t look the same in the pan. I log on to the computer and checked the list. Yes, it says they are the same. I wonder if I should bring it back for an exchange because I have not opened the new one yet but I didn’t have time.

After staring at both for a good few days, I convinced myself that they are not the same.

So, I opened up the new one and placed it into the palette nicely. 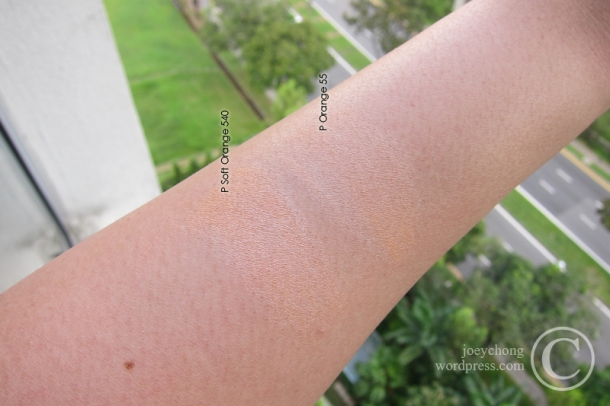 I am not sure if the camera picked up the slight differences between both blushers. The differences are not major – not justified for having both.

Overall, I find that P Soft Orange 540 (new) is more pigmented and has a brighter orange undertone whereas P Orange 55 (old) has more white in it. Texture for both are very much the same.

If you have a couple of the old blushers and/or eyeshadows from Shu Uemura and would like to pick up some new ones, I strongly recommend you to keep the list handy for referencing. Due to the re-formulation, colours may seem different in terms of texture and colour payoff, it’s normal I guess. The lightings at shopping malls plays a part too, making it difficult to judge. But going home to find out that you have a similar one is really not worth the extra trip.

Have a lovely Saturday, thank you for reading.