Hello everyone, I hope you have enjoyed my two posts on Best Of 2011. Let’s kick-start 2012 with some sparkles from Deborah Lippmann shall we?

Deborah Lippmann “Dance Music” Holiday Mini Trio retails at HKD390 which works out to be approximately S$65 for a set of three 9ml nail polishes. It is available at Nordstrom at the price of S$40.76 before tax and shipping. However, for those residing in Singapore, I believe that Nordstrom is unable to ship them internationally. I am afraid, the best bet might be on eBay.

Dance the night away with any one of the luxurious shades in an exclusive three-piece nail lacquer set by celebrity and fashion manicurist Deborah Lippmann.

Each sparkling glitter lacquer is packaged in an adorable miniature replica of her signature bottle.

The set comes with its own cardboard box which is very sturdy and the miniature replica of Deborah Lippmann’s signature bottle is simply adorable. Great as a gift. 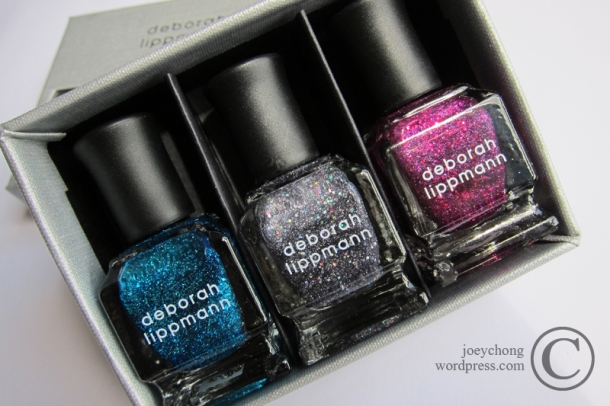 Let’s start with swatches of my favourite shade amongst the three – Dancing In The Dark.

Dancing In The Dark a brilliant silver/grey glitter base with accents of multi-coloured glitter that sparkles like a disco ball in the dark. It is one of the most beautiful glitter shades I have in my stash. It’s simple yet complex. When sunlight hits, the multi-coloured glitter glistens like jewels and gems. 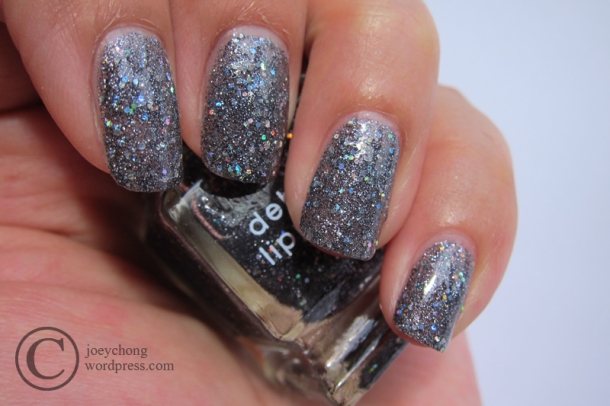 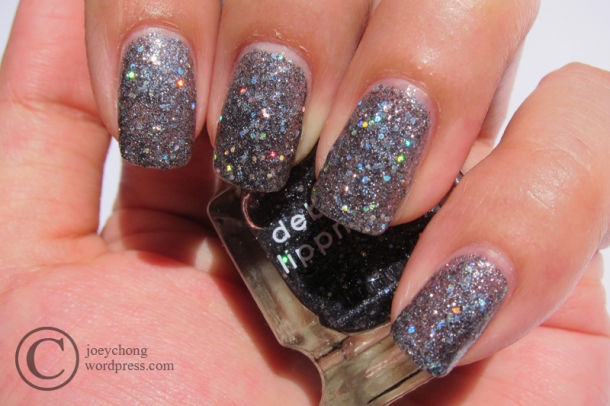 On my middle finger, I have 2 coats of Just Dance and on my ring finger, 2 coats of Flash Dance. 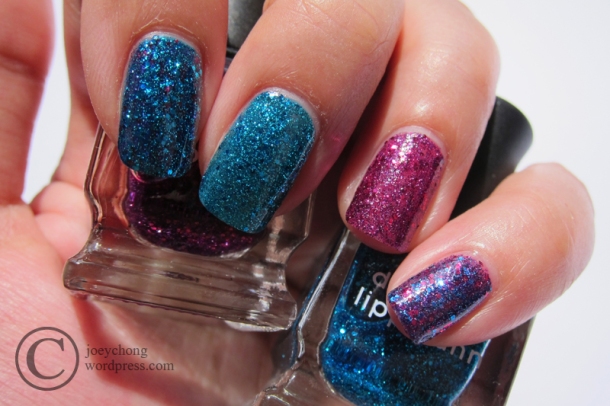 All the three glitter shades are gorgeous with Dancing In The Dark being my favourite. They are easy to apply and the glitter particles spread onto the nails very evenly. Because I have short nails at the moment, 2 coats provide enough coverage and opacity for me. But if you have a little extra time on hand, 3 coats would have been perfect.

All swatches taken in daylight without flash. All swatches swatched over Nail Tek Foundation II, 2 coats of nail polish (unless otherwise stated) and finished off with Seche Vite Dry Fast Top Coat.