Up and feeling refreshed from our 20+ hours of traveling the day before, we had breakfast before 7am this morning and we were out on the streets just when dawn breaks. We arrived at The Viking Ship Museum before their opening hours and spent a good 30 minutes outside in the freezing cold weather.

Speaking of weather, Oslo was freezing!! Much colder than I anticipated and guess what I was wearing? Heattech leggings from Uniqlo — only. Thinking back, I don’t know how I did it. Love the hat and gloves set I bought from Accessorize at Changi Airport just before departing. The bright colours work very well against a white backdrop and it matches my Uniqlo Ultra Light Down jacket.

Making full use of the time spent waiting, we took lots of photos.

The Viking Ship Museum is located at Bygdøy in Oslo. It is part of the Museum of Cultural History of the University of Oslo and houses archaeological finds from Tune, Gokstad, Oseberg and the Borre mound cemetery.

The main attractions at the museum are the Oseberg ship, Gokstad ship and Tune ship. Additionally, the museum also displays sledges, beds, a horse cart, wood carving, tent components, buckets and other grave goods. Many fully or nearly fully intact Viking ships are on display as well. Its most famous ship is the completely whole Oseberg ship.

Pictured above is the well-preserved Oseberg ship discovered in a large burial mound at the Oseberg farm near Tønsberg in Vestfold county, Norway. 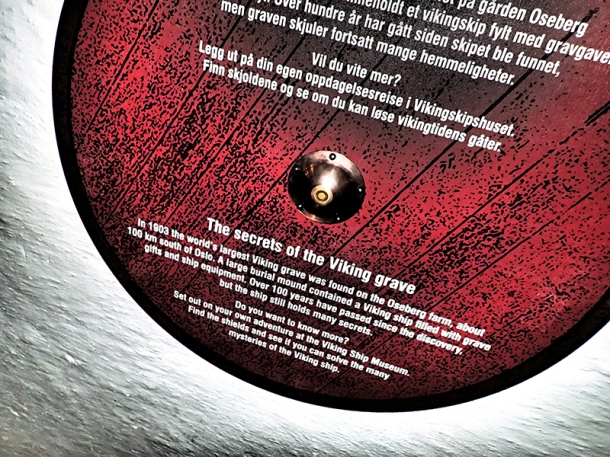 Details of the Oseberg ship.

This ship is built almost entirely out of oak and measures 21.58m long and 5.10 wide. It has 15 pairs of oar holes which means that 30 people could row this ship. The bow and stern of this ship are elaborately decorated with complex wood carvings in the characteristic “gripping beast” style, also known as the Oseberg style.

Skeletons of two women were found in the grave with this ship. The opulence of the burial rite and the grave-goods suggests that this was a burial of very high status.

Pictured above is the Tune ship, a Viking era ship found at Haugen farm on Rolvsøy in Tune, Østfold, Norway.

This ship was built around 900 AD and is made of clinkered oak planks. It was found in a boat burial mound and was excavated by archaeologist Oluf Rygh in 1867.

Lastly, pictured above is the Gokstad ship, a Viking ship found in a burial mound at Gokstad farm in Sandar, Sandefjord, Vestfold, Norway. Dendrochronological dating suggests that this ship was built around 890 AD.

This ship is clinker-built, constructed largely of oak and was intended for warfare, trade, transportation of people and cargo. It is 23.24m long and 5.20m wide. This ship is the largest displayed at The Viking Ship Museum in Oslo. The topside planks are progressively wider. Each oak plank is slightly tapered in cross-section to allow it to overlap about 30mm the plank above and below in normal clinker style.

During the excavations, the skeleton of a male aged between 50-70 years was recovered. The skeleton was found in a bed inside a timber-built burial chamber. Although the identity of the person buried is unknown, it has been suggested that it is that of Olaf Geirstad-Alf, a petty king of Vestfold. He was of the House of Yngling and died about this time.

The grave was furnished with grave goods. Apart from the ship itself, they consisted of three small boats, a tent, a sledge and riding equipment. It is believed that the mound was plundered in ancient times. The excavation in 1880 showed that valuables of gold and silver had been removed. In the Viking period, weapons were considered an important part of a man’s grave goods. In the case of the Gokstad ship, any such weapons were probably taken by grave robbers.

We were amongst the first people to visit thus we almost had the entire museum to us. We took a huge amount of pictures during our visit but uploading all would make this post too long. For those who wishes to learn more about the ships, click on the links I have provided above.

Other artifacts that survived the plundering were displayed in glass boxes at the museum.

The Viking Ship Museum is definitely worth a visit for anyone. My visit has sparked new interests in learning more about the Vikings and ship burial, perhaps I can start by watching the Vikings TV series.